We had Hog as most of you know. But we were moving to FL and Hog was used to playing with my mom's two bostons Tink and Rebel everyday. He was going to need a sister in FL.
So I started searching on www.puppyfind.com for puppies near where we were going to be living in FL.

I found this litter

Born June 23rd 2005. The puppies would be ready to go to their new homes august 4th. We wouldnt be getting to FL until august 2nd so I thought that was way too soon to have a 6 week old puppy.

But her breeder kept sending me pics like this

and saying stuff like: SHE COULD BE ALL YOURS!!

So I showed my husband the pics and he said to send her a deposit :) I sent the deposit and told her to start calling her Lulu Belle instead of two-spot (what she was calling her because of the two spots on her little head) If we would have known she was half grizzly we would have named her Lulu Bear.

When the little bear arrived to us she looked like this

Hog at first hated her

But soon he began to love his little sis

They even did very bad things together

So silly yet so pretty

while tiny Toggle stayed the same 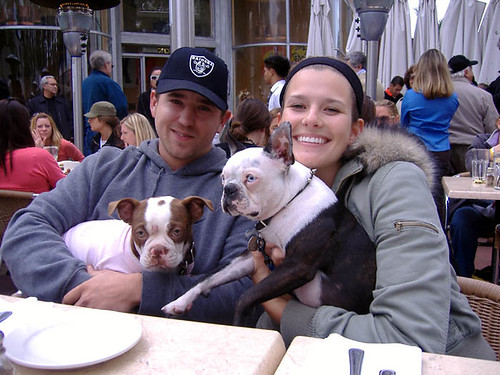 So HAPPY BIRTHDAY MY LITTLE BEAR!! WE &hearts; YOU!!!