More to come soon! It's hard to get her to sit still for pictures :)

I've been here for like...almost a year and I have never gotten around to posting anything on my boston boy (shame on me!) but I love this community and all the other cute little bostons so I figured that there's no better time than the present to finally make a post on my doggy lol

So his name is Scar, but we also refer to him as Scarloey, Scarloples, but most commonly its just Baby Scar lol He'll respond to all of them as long as he hears the Scar part, so anyway he's got a little backstory behind his name. He was born with a scar on his head (a guy at the groomers was once like "oh war wounds in the womb huh?" lol) and so natuarally the name just sort of originated from there. We got him from our friends, they had two female bostons, Sadie and Chocolate (Chocolate was Sadie's daughter from a previous litter.) Although Scar's littler was actually an unexpected one for them, since they had taken Sadie to a relatives for a day and their relatives also had a boston and...well yeah, suddenly they had to plan for pups lol They said we could have one if we wanted and we just happend to be looking for a dog around that time so it was actually very lucky for us. She had 8 but 3 passed away, it was August and the heat wave got to them, but the other 5 did ok, our friends spent hours on end keeping them cool, it took a lot because it was just their luck that that year their A/C had to break down. But in the end they came out with 3 boys and 2 girls, the interesting thing is that you would think Scar would be disadvantaged because of his scar but it turned out to be the complete opposite, he was the alpha male out of his brothers and sisters! he liked to wrestle with them and he'd run further out than they did when you toss a ball and everything, it was a total surprise for us but the scar is really just in appearance and hasnt effected him in any way.

(he was sad that his brothers and sisters were gone, I mean it was constant crying and he kept trying to make you feel sorry for him...yes it worked -_-)
( Collapse )
So that was taken the day after we first got him 2 years ago...and this is him now...

yep, he grew up, he is now 28 to 30 pounds of huggable boston ;D even in the earlier pictures above he was already bigger than his brothers and sisters and he just kept growing from there lol
( Collapse )
As you can see the scars are just along the top of his head there. But his story doesnt end yet! now the sad part comes about his little family...you see about 6 weeks after Sadie had the puppies she passed away...the victim of a snake bite, you see they have a 12 acer property and the majority of it is dirt and brush and well it being summer and all they had just killed a baby rattler a few days earlier and so they think one of them might have got to her. It was pretty quick, they didnt even have time to take her to the vet =( A lucky thing was that the puppies had just been weened days before so they were not as dependant on her, but they were all looking for her after and wondering where she went, it was such a sad thing.

But Chocolate was still there and the most interesting thing was that she seemed to take up being a sarogate mother for them, after a day they all started following her around and she would help move them and stuff. The day we went to see Scar for the first time we went inside while the puppies stayed outside and they have steps leading up to the front door and all the puppies were tried to get up the steps and Chocolate was helping nudge some of them up there, it was the cutest thing. Before that Chocolate had been sort of a loner, our friends said that she didnt really like the new puppies when they came around and would get annoyed and walk away from them if they tried to play with her since she was older and she just let Sadie take care of them but after that she took on the job to take care of them and it was really sweet. So it was a good thing that they had Chocolate around, we were able to get Scar for free and they later sold his sisters and one brother and kept the other brother for themselves (he had one blue eye and one brown eye, as well as a spot on his head.) And everything from there is history lol I actually have picture of the other puppies that I'll have to post soon...but for now...here's one more of you know who...

I just wanted to thank everyone for the kind words about Zoe. I really like this community a lot! Everyone is so friendly and it's a lot more active than other communities. I know she and I are going to have a lot of fun ahead!

The photos of Cornholio, Maizy and Wrigley from earlier today reminded me of this old photo from when we first got a digital camera, like, five years ago. 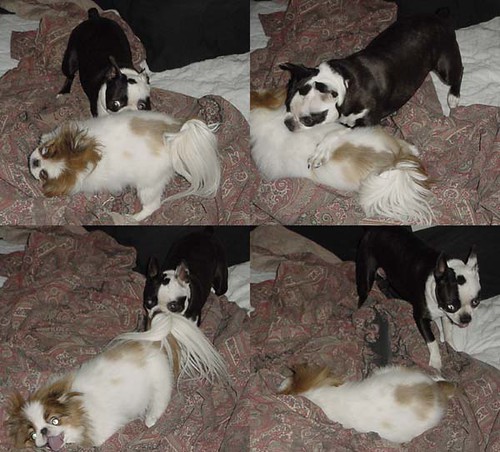 Bella and our Japanese Chin, Akachan, wrestling on the bed.

(another oldie but cutie) 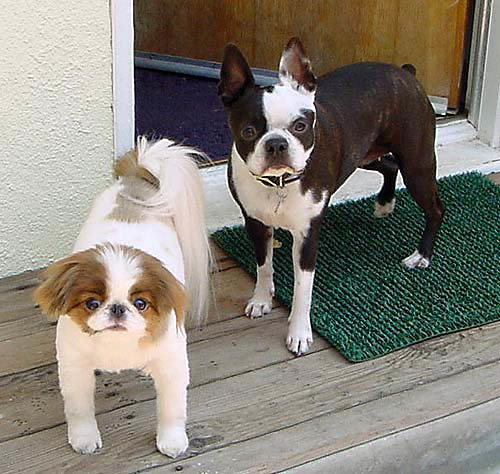 By the time Bella was six months old, she was bigger and much stronger than Akachan. She would grab that long, fluffy tail and drag him around the yard. Eventially, she ate almost all the hair off his tail.

Akachan still instigates play with Bella, even though she can totally stomp him. He antagonizes her and then runs and hides under the dresser in our bedroom. Then he continues to tease her until she goes absolutely nuts trying to get him. It's so funny. I wish they were more evenly matched so they could play safely together. I have to keep an eye on the little guy.

Kong is trying to get in the last of his outside playing before it gets too cold.

But he is ready for that too!!