There is so much drama and gossip that goes on at the dog park it is ridiculous. It is exactly like highschool. If you aren't in with the in crowd then you are just a loser and need to go to another dog park...

One guy today was saying they should make a reality TV show on the dog park lol. They really should.. if you like gossip and drama work at the dog park!! I am never not entertained working there.

Today I start going in with Hog and Lulu, taking their leashes off and I hear: "Those dogs better not jump on my dog." I ingore the old hag and let them in. Lulu is such a huge lover that the first thing she does is greet people. The lady was sitting on a bench next to my old man friend that comes every single day with his pomeranian. (all he does is growl and bark lol)

I'm hanging up their leashes with my back turned to the bench and then I hear her screaming. "GET OFF OF ME!!!!! GET DOWN NOW!!!" I look and she is throwing and pushing Lulu off her!!!!

I was shaking I was so pissed. I walked over there grabbed Lulu and Hog and said: "You are ridiculous lady." Then as I was leaving I told her she shouldnt come to the dog park with a dog that she doesn't want other dogs jumping on. THAT IS WHAT DOGS DO!!! I work there so I couldnt go off like I wanted to. But if I didnt work there.. I would have gone crazy on her!!

So I took Hog and Lulu on the big dog side where they got stampeded and trampled. All the old people on the little dog side started arriving and yelling to me: "What are you doing over there? Come back over here!" I had to explain to everyone what an evil witch that lady was.

Then after she left the old man came over to the big dog side which was shocking!!! Because his dog Peanut doesnt play or anything just growls and barks... anyways he came over and told me what an evil witch she was and that she works for Disney lol!! I guess she hates kids too. He also said one day she was there another lady tried to pick up her dog and pet him and the old hag screamed at her not to touch her dog!

But yeah I HATE IT WHEN PEOPLE BRING THEIR PRECIOUS LITTLE DOGS THAT CANT BE TOUCHED TO THE DOG PARK!!!!!!! IT'S A DOG PARK FOR CRYING OUT LOUD!!!

Sorry had to vent... anyone else have any dog park drama stories? I could go on for days and days.. Oh yesterday (I wasnt working when it happened) a BOSTON TERRIER attacked another dog. There was blood and everything and now the boston will be banned lol.

well I called the Vet this morning and made an appoitment for Bo's operation. Nov 22nd @ 7:45am.
poor little guy is going to go insane when I leave him there!!

also... did anyone hear on the news about the dog flu?? I'm not sure if its just around my area (Boston) or what, but if you hear your dog cough or if he/she has a runny nose, you should bring them right to the vet. I guess six dogs have already died from it :( ?!?!

well just wanted to share that! Have a nice day!

Ok, so there's a chance that I'm just ignorant, but is there such a breed as a miniature boston terrier?

Some chick saw me being walked (seriously, he's more demanding/hyper on a leash than my lab) by Titus, and started talking about how she has a pair of miniature boston terriers which were teeny tiny and far more expensive than regulars, blah, blah, blah.....

I was like "interesting, but I've never heard of such a thing..how small are they?" and she replied that the male was 8 pounds and the female 6 pounds, both are a little over a year old.

So did she just stumble upon a pair of runt bostons and get tricked into paying more? Or did I miss something?

Just curious, thanks...feel free to call me a moron, if applicable. :) 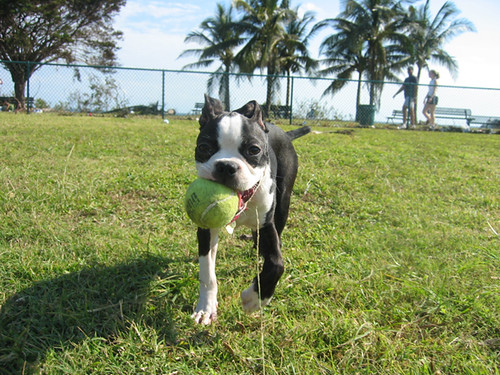 Brad-Pitt had a great time on his first visit to the dog park!!!

If you received the most votes of the month or you are in a tie-breaker, and you have a larger version of the photograph, PLEASE post it here.  I am getting the calendar layout together and we want the pictures to be as big as possible.

As usual, Snopes is on the job!

Ok guys...I need help with a name...
Give me some suggestions for names beginning with I, E, or D.
Thanks!