I was just in the pet store and they had a BOGGLE for sale. Yes it is what you are thinking. A Boston Terrier Beagle Mix. The Puggle (pug beagle mix) is the latest rage in NYC right now. They go from 500$-900$ I wonder what they are asking for the Boggle. I hate how they are taking muts and charging a fortune.

Hog acts so much different when Lulu isn't around. Before Lulu was allowed to go into the dog park I couldn't take Hog on the big dog side because he would fight with the other dogs. I tested it out again with Lulu and he is totally fine as long as she is in there with him.

Yesterday I took Hog to the dog park for the first time since Lulu's been fixed. I let him on the big dog side and the first thing he did was run into a mudhole. His eyes looked CRAZY because his face was black lol. When he gets wet he for some reason thinks he's tough so he fought with two dogs.

I had to take him on the little dog side where he is fine... sooo odd! Just because Lulu isnt there. We went this morning and met up with his best friends ever Weezer and Kiley. Whenever Hog, Lulu, Weezer & Kiley are together everyone leaves the small dog side. It is weird!! I think they get intimidated or something.

It was sad today without the Lulu there. She always adds color to the fight being brown haha. A couple brought in the start ball you will see in the pics. We warned them it would be popped in a matter of seconds. They said they didn't mind....

I was crying tears of laughter over this picture. My husband said Hog looks like something from the Mask hahahaha. That is Weezer, Kiley, and Hog Dog. The guy holding them is Kiley and Weezer's owner. 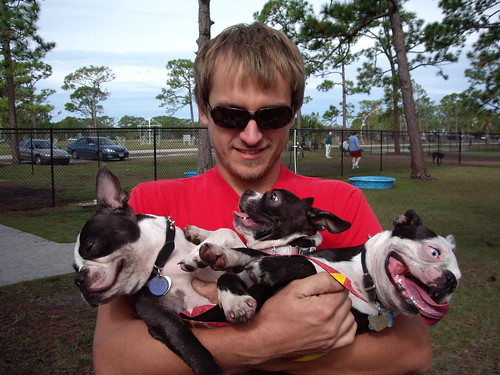 I love their bellies! They look like little pigs 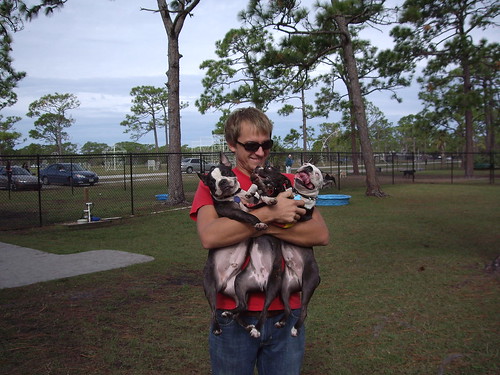 I have decided to try a blog for Joey, since everyone seems to enjoy my posts. I will continue to post in here, of course, but I hope to update this blog daily.

I know I haven't really been posting. I got a new job and it keeps me busy.

Wanted to post a picture of Ashton to let y'all know we haven't forgot about y'all.

This one was from summer, but it's definatly my favorite of him.

I'll post some new pics, I have tons, as soon as I can find my camera's cord.
Collapse