My gf and I are having quite a problem house-breaking Jackson. Did anyone else have a lot of trouble, and if so, how did you solve it? Also, how old was your Boston before they were house-broken?

Yesterday when I went to Petco to pick up some food and treats, I looked at the nail clippers. I've just been clipping Sophie's nails with toenail clippers for people which was okay when her nails were still little, but now that she's growing to grown up dog size, noootttttt such a good idea and its always a huge pain in the ass because she hates having her toe nails clipped. Anyway, the clippers were like $11, and I decided just to ask how much they charge at their groomers' to clip. TEN DOLLARS!!! And that includes having them bathed, cleaning their ears aaaannndddd expressing their glands (I watched my sister in law do it to her dog once and even though I'm not at all squeamish it kind of grossed me out, plus I don't know how to do it myself)... Yeah, only $10. So, that's where Sophie's going after I get done with class.. To not have to fight with her or feel bad if I hurt her is worth the $10 all on its own.


Just thought I'd share.
Zeus went to the park today. It's not that cold, but since he never got a lot of fur he had to wear his coat. 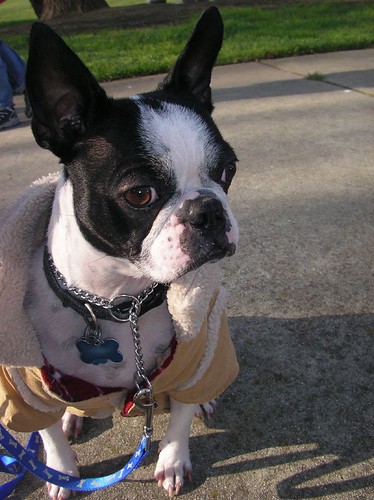 my vet guy (he said after keeping my dog for a day he had decided he wanted a Boston!)

Hi everyone! Just wanted to share a recent pic of my puppy! We got her just before Christmas and she's already getting so big :) She's doing alright with potty training, but not there yet. She loves this ball, but it squeaks SO loud!! It's pretty funny when she runs with it... I think it's the same size as her head!