Kyle and I took Charlie to Wash Park Sunday afternoon. It was such a beautiful day that we decided to run outside. We figure we ran about 2.5 miles total....Charlie made it the whole way with only a couple poop stops. It was unbelievable how many people were out tanning, playing volleyball, walking, running, tennis, basketball, playing on the playground, canoeing, biking, surreying, etc. It was wonderful. After we got done with our run, we meandered around the park again so that I could shoot up a couple rolls of film. Unfortunately, it was film and slide so I'll have to wait until the negatives are processed and scanned to a CD. Charlie even learned how to swim. There was a small canal / creek that was just deep enough in some spots that he had to swim. He chased his ball in there and had a great time...and here I thought he would never get over his fear. Here's a couple pictures of Charlie after we got home. We decided to just hang out in the livingroom. We put on some music...I sat twisting beads (for our wedding flowers) and Kyle looked at wedding articles.

Charlie flopped over in the middle of the floor.

Then once Kyle got up from the couch, he took over that....the big one even.

Hey everyone! Quick question for you all. Danger has been doing this weird "cough, clearing his throat" thing lately. Is this normal for bostons? My dad has a boston and he does this noise too, but not as bad as Danger. I just want to make sure that this is normal and that there is nothing wrong with him. Let me know. Thanks so much everyone. I absolutely LOVE this community!!!
I have been very pleased & touched by the number of people who have responded to Scrapple's predicament. Hopefully we'll be able to schedule surgery sometime this month (although part of me doesn't want to jinx it by being too optimisitic). As for Scrapple, he is adjusting fairly quickly--he's sleeping a lot during the day, but his appetite is good, his bowels are working, and he still wants to play with his ball, and at night he gets feisty and wants to play with his tug-toys. Tommy & I are probably more freaked out about the goop-filed blister growing out of his eye than he is.

As I continue digging through my closets looking for extra books & comics for sale, I keep stumbling over stuff I forgot I had--like extra back issues of SWAMP THING and the comic book version of SUNGLASSES AFTER DARK. I'll post a list of what I have ASAP--as I still have to do my taxes before the 15th. But here is the recent updated inventory of books available for a $15 donation via Paypal account nancycollins229@comcast.net. If you don't have a Paypal account but still want to donate/buy something, direct all inquiries to sonjablue313@yahoo.com.

Here is a picture of Scrapple in happier days:

Go check out today's MSN website and scroll down to the MSN Specials and you will see a cute little BT representing the Doggy Diary. If you click it, it leds to even bigger BT pic
http://www.msn.com/

I'm so happy to join this community because I will be picking up my baby on Friday! And I'm sure I'll be a post whore, please add me to your friends list if you like as well.

This will be my 2nd BT. A little girl who I have yet to name. 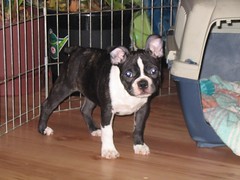 My other BT who lives with my now retired dad who refuses to give her back to me is Tetley or Big T.

I'm so happy! I sound like I'm in high school! :)
Collapse