These pictures are just from the last week or so. Nothing too fancy, enjoy! 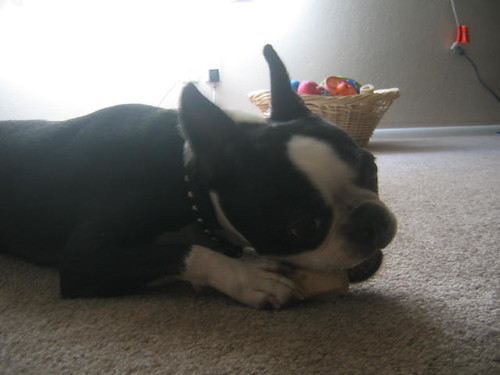 We are HOME! Mom got us some great nylabone nutrition bars, I think that means they are good for me, I dunno it tastes like peanut butter so it is ok with me!!! 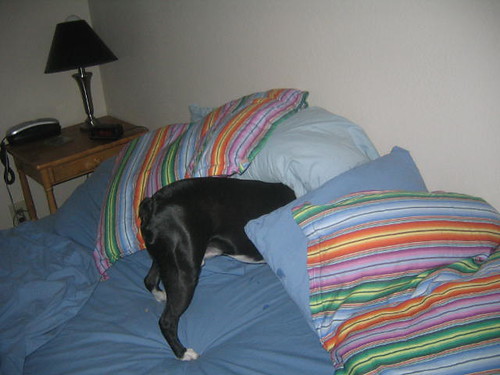 Please do not worry, Doofus is still a doofus. He hid his bone in the bed...because I will NEVER find it there!

So, I've decided to switch Bella to Nutro food. I'd still been giving her the food that the breeder was giving her, but I wanted something more nutritious for her. Well, I just gave her her first bowl of mixed food (70% the old kind, 30% Nutro) and she's EATING AROUND THE OLD FOOD!!! How funny is that??!

Let's start by saying that I grew up with big dogs -- first a giant german shepherd mix, then 2 giant/psychotic golden retrievers.

I now live with my boyfriend, and have taken over as mommy of his boston, Clancy. Clancy made me like little dogs, but I've still held big dogs and little dogs in very separate categories. There's the big dogs -- who slobber gallons, crush ribs, wrestle, etc etc -- and then the little dogs -- who combine the fun of dogs with the portability and manageability of cats.

Well, last night, Clancy did something that is going to force me to redefine my whole category system:

He killed a Kong.

We were putting together my new computer desk when I turned around and saw Clancy chewing on a little red disk. A moment later I realized that that disc was actually the small end of his Kong!

Even my parents' goldens can't get through a Kong!

I took a picture just to prove that the impossible really happened. Once I get my boyfriend to upload it for me, I'll share.
Collapse