I was pretty pleased yesterday because Gambit made it all day without any accidents, though he did howl like a banshee every time we put him in his crate. He howled again this morning for the first time, usually he goes right back to sleep. But the cries are getting better. Yesterday the first time he cried for 30 minutes, the next for 20, the next for 15 and this morning only for about 5.

My husband injured himself in the eye at work yesterday, and had to come home and go right to sleep. So I was up on doggy duty. Usually he stays up later than me, since getting up at 6:30 doesn't make it easy for me to stay awake past, say, 11 pm. Usually we take Gambit out around 10:30 and then again around midnight, and then again around 1 am (by "we" I mean my husband)but I had to do it b/c he was incapacitated. Well, he went potty at 10:30 but Gambit didn't have anything in him at midnight. I remember my husband told me that the previous night he hadn't taken him out at 1 am and yesterday's crate was clean and dry, so I left him at 12 and went to bed.

Stupid me. If the dog doesn't poop before bed, I should take him out again at 1, or 1:30, even if it means going to sleep and setting my alarm and dragging him out. I woke up at 6:40 to two - yes TWO - steaming piles for me in his crate. He's pretty good about going on the newspaper, but he managed to skid the newspaper over a bit so he pooed on the floor of his crate. I hope he is loving that lysol and vinegar smell!! During the day he doesn't get paper b/c I want him to hold it, but during the night, well, sometimes he might have to go, and he doesn't cry, he just goes.

He hasn't pottied yet this morning besides a few pees. So I guess he's holding it until his 9:45 walk. He's gone to sleep after some fussting. I put the blanket over his crate, so maybe that is helping, though he tries to eat it through the bars!! I'm going back to sleep too. I better not wake up to more poop!

In this shot, she's crying because she realised Steven was, in fact, going to eat his clam chowder and she couldn't have it. 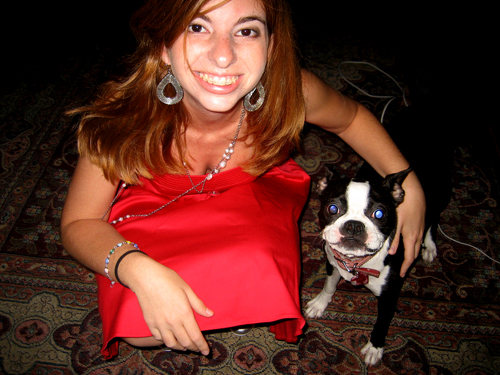