Thank god for Tivo because I had to watch this over and over last night! It's a campaign ad for Michael Steele who is running for Senator here in Maryland. He's not my candidate of choice, but he almost won me over with this ad!

I took a lot of pictures of my girls yesterday. One of which I loved so much that I had to make a new avatar out of. :) But before I get on to the goody-goodies, I wanted to ask a question. Does anyone else ever get a strange feeling in their throat after kissing the doggies? It's like a strong tickle in my throat that makes me cough and cough. I'm wondering what exactly causes this. What's really strange is that buttercream icing now has the same effect on me. After a couple of bites, the icing makes my throat tickly and I start coughing and coughing. It's a very weird sensation.

Well onto the pictures...

I am really trying to help Niko learn to be photogenic, but so far it is a lost cause. One thing she does love is swimming, the humans took some video of her here:

I bought the latest issue of "Globe" because it had a picture of Denise Richards walking her boston terrier in it, and the boston was very cute. She has 2 bostons, a frenchie and two pugs (a golden as well). The article was about Charlie Sheen wanting to keep one of the pugs, a black one named Betty.

I am such a boston addict...

There are some pictures on this fantastic site http://celebritydogwatcher.com

And here's a picture I stole from that site to share, Famke Jenssen with her Boston "Licorice"

it's hard to decide who's better looking in this picture!

Major is a year and a half now. He has always been an independent minded spoiled little feisty devil. He is also very very loving and sweet. One thing I made sure to do was socialize him well with other dogs. He has been going to the park regularly since he had all of his shots. We had him fixed at the earliest age possible. Every now and again he would scrap with another dog close to his age, but mostly he really really loves to play with other dogs. Recently though, I can't take him to the park without him getting in to a fight. He'll be playing nicely, and then something will make him snap and he'll totally go after a dog. I don't even want to take him anymore because it is so embarassing. I'm talking to trainers about it, but am wondering if anyone else has had similar experiences or advice?

Here are some quick pics of us celebrating Doofus's birthday 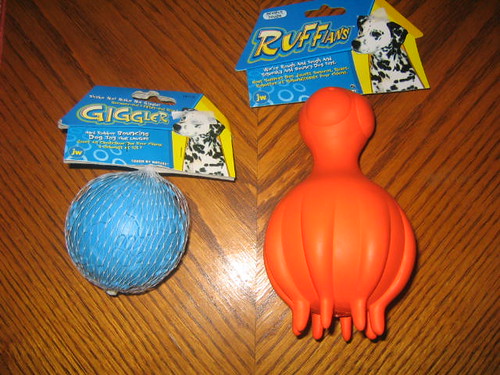 Mom was nice and got two toys, so we each got one. But it doesn't matter if she bought 200, Doofus always wants the one I have. These are made by the same company that makes the Cuz, so technically they should be MINE, but I will let it slide for his birthday. 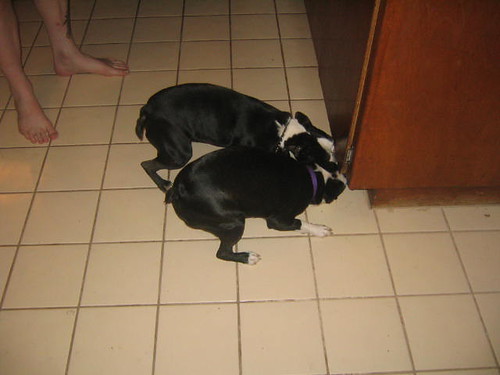 So we both went after the ball first. Dang those carpenters who build cabinets that come out that far, I can barely get my head in there!!