The community is up and running, it's just bare bones right now, I have to make up the background, but it's there, so start posting all your found boston images and links! Anything is allowed:

the community is called foundbostons, just look for the beast!
I have a double dipper of a post, today, as I have a FOUND BOSTON spotting, AND a way to help out a really great cause.

Boston Models Sweater for The Animal Rescue Site. (link opens in new window)
I've been browsing this site all morning, and put up one of the buttons on my myspace page and am about to do my LJ userinfo, as well.
:-)
ETA: Oh man, I KNOW better than to look at these things. I'm thinking, "oooh that and that and that for my cat, that for Max Moo, and THAT for the Christmas tree, and, and.."
Sorry about the screwy link. It's fixed.

Hi everyone. Im new.
My name is Michelle and Im on the difficult task of finding the perfect breeder so I can find the perfect Boston for me.
I live in Vegas but my family is in Southern Ca.
So if anyone knows of any trustable ideas in either or has any ideas.
Please let me know!!

.... Daddy's enemy, that is. Earlier this afternoon, I look over on the bed and see Zeke snoozing away, keeping his favorite toy (CUZ) close at hand. I wonder if he wanted to make sure his annoying sister Hazel didn't take it during his nap? Little did he know, she was passed out right behind him.

Why is the cuz his daddy's enemy? Because Zeke thoroughly enjoys squeeking it in daddy's face for several hours a day. Haha

I haven't talked too much lately about my recent employment at PetSmart. After much time freelancing, and working for horrible bosses, I was employed as a graphic designer on the Visual Merchandising team at PetSmart. I work on the interior structures and layout of the stores' permanent signage, so when there is a chance to do a photo-shoot I always suggest my Bentley. So keep an eye out for his collar modeling and pen signage at a PetSmart by you!
( Collapse )

my wife and i were married september 8th, and here's one of the photos we took with our lil guy

Gambit is a little over three months old. For those of you with bostons this age, or remember when your bebehs were this age, how frequently would you take them out to potty? He sleeps through the night fine, no problems, and can go 3 -4 hours sometimes when he is asleep, but when he's awake, I try to take him out every hour, hour and a half.

Now, when I'm at work, he is taken care of by my husband's gramma, who says she usually lets him go for 2 or three hours before taking him out to pee, often he is awake for that whole time.

In my experience, in our place, Gambit can't go that long without an accident. Then again, that was a while ago and I've never tried letting him go longer since then.

Tonight we were at gramma's and he played, slept for a bit, woke up, played some more. It was about 2 and a quarter hours, and he seemed fine, then he let go unexpectedly and without warning on the carpet. Only a dribble, my hubby took him outside quickly.

But still. Gramma was shocked, she said he's never done that. But I guess he was really needing to go.

So, timelines for potty? I wonder how long I can push it, because, living in an apartment, taking him out for a quick pee is a ten minute process. lol. Not that I mind, he's a baby and he has a right to pee.

Also, he's been pissing on stuff when I'm not home. On my hubby's winter coat, and on the sheet we use to cover the bird cage at night. I think it's because I'm not home - I'm at my drivers' ed classes on the weekends now, and his routine is screwed up. Because my husband says he definitely pees before he comes in, and then deliberately pisses on stuff not twenty minutes later.

I guess that's just his way of rebelling since his routine is screwed up? Or should I look into something else? He's on pills for a little bit of the sniffles he has... could they be weakening his muscle control?

So my mom seems to think we run some sort of pet hotel here in Chez Stains. Our most recent guest is our friend Rog. If you recall he came to see us not too long ago and we had some fun. However, Rog is now living here for the next TWO WEEKS while his dad is off on some trip to some place called Can ah Duh. Now that sounds like where I should send doofus face!!

Rog and Tanner seem to be in love. Those two spend endless amounts of time just rolling around on the floor, doing some strange dancing stuff, playing bitey face and LOTS of humping. Anyway, here are some pics. 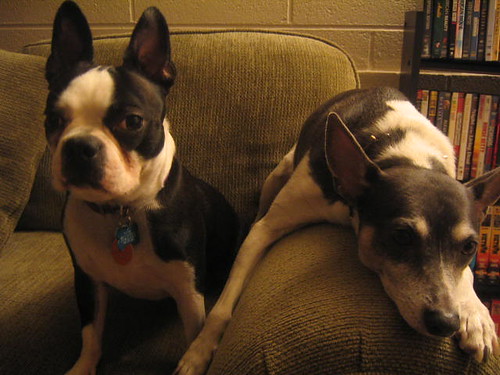 Here they are watching some TV. They both have the inability to tell when sounds are on the TV instead of being real. It gets old. 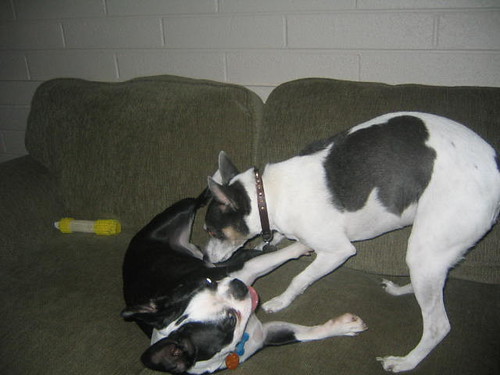 I don't even want to know what is going on here!!!

foundbostons is completed!! Thanks for those of you who have already joined! I had to share this amazing painting I found. I love how it says that the world revolves around boston terriers!