We've been so busy with our new house that I haven't had much time to take new pics &/or upload them. So sorry you guys have seen all of these already...

( Collapse )
Genma is doing great, he will be 9 weeks old on Thursday and is getting so big! He's doing really good with his crate now, he will actually go in there on his own and get right in his bed and take a nap. He's doing pretty good at going potty outside, but has his accidents. He went to the vet last week, he's as healthy as can be. He got his 2nd round of shots, and goes back the 26th for his 3rd set. He's also starting puppy training at my work on Sunday. Just thought I'd update you a little, and end with some pictures.

So mom said lots of people like my posts and not a whole lot has gone on around here lately, so in an attempt to please you guys, she decided to dress us up. Don't get me wrong, I love you all, but SHIRTS?! GREEN SHIRTS with goofy collars??? Anyway, here are some photos and videos. 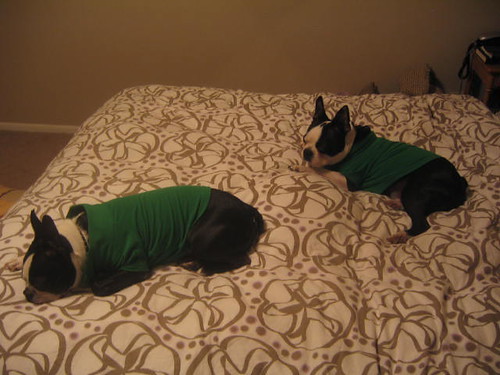 Do you see how thrilled I am about this?? 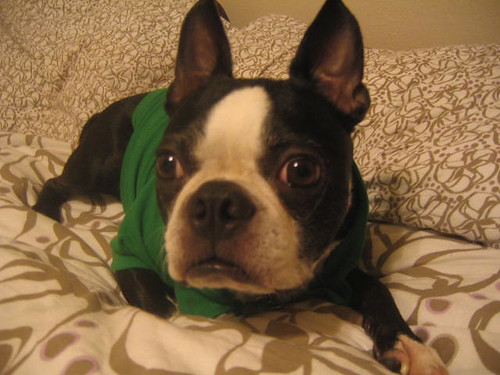 I just don't think green is my color??

Gambit was "listless" as his gramma put it today. I'm going by her word because she babysits while I'm at work. Also, he vomited again tonight, so we went to the vet.

He got a shot in the bum (which made him scream - broke my heart) and he got a thermometer up the butt too (which just paralysed him with horror). Long story short, vomiting = bad, but no fever and he seems alert. The shot was for his tummy. The vet gave us pills for him to take for a week (THAT was a hassle going down) and new puppy food he has to eat. I think they MIGHT just be pushing their brand of puppy food. The vet sells only Eukenuba which they try to sell us whenever we are there, but we use the holistic stuff his breeder put in his contract. :S Either way, we walked off with a jumbo bag of Eukenuba puppy food, pills, caution not to let him play too hard or be handled by a lot of people (it was a pretty exhausting family weekend and he was more or less mauled by all visitors, much to our dismay), to play "gentle" with him for a few days, to not let him eat his bullwrinkle anymore (vet says they are gross - I agree, but it was the reccomendation of the breeder) and a $117 dollar bill.

We are watching him tonight. He's not allowed to eat, so obviously his bathroom trips have been much less frequent. We'll see how he fares tomorrow. He's much more playful than this afternoon, no more throw-up either. Looked confused as the dinner hour came and went without snacks or dinner, but seemed ok. Slept a LOT. We penned him back up in the living room (We've been letting him run around a bit on his own since he no longer pees in the house) since I don't want him eating up anything dangerous that might be on the ground. He's at the chewing stage and he'll swallow anything he can find.

I will update later. Puppy is snoozing on the couch and is tres cute. :) I hope he gets better. Vet didn't seem to concerned... but it's scary!!
Collapse