Sky King goes tommorow for his rabies shot.  I'm scared to take him to the vet though.  I have a feeling that the Dr's gonna find something wrong with him.  He's getting old and lumpy.  :-\

I know his back seems to bother him some, he's getting a bit crooked.  Maybe he'll be fine.  I hate that my little boy is turning into a rickety old man.
I havn't updated ya'll in a long time but just wanted to let anyone that has a myspace know my girl Bella has one now!
http://www.myspace.com/bellaeubank

Hello everyone!
I have a question for those of you with more than one BT,or another dog for that matter. Has having a canine buddy for your BT helped with behavioral problems?

Here are my thoughts...My little Leo has been acting out since I've started working. Really all that means is that instead of only having an hour or so to be destructive (between the time my husband and I go to bed and he decides he wants to join us), he now has the whole day to get into things he shouldn't. Then when I get home from work, he is a bit more clingy than usual and really wont let me leave his sight. While he has a kitten that he loves to play with, I really think that Leo would benefit from having another BT or even a pug! (Okay that's a jab at my husband who reads this community...) After the holiday season, my hours are going to be normal enough that I think we could handle potty training, etc of a puppy and there is going to be less time between when I leave for work and my husband comes home.

Does anyone have any thoughts about this? I really think Leo is just lonely, especially since before my husband and I had him, he lived with my dad and his border collie. He has always had another dog around.

Anyways, text only posts make me sad so here is a pic of Leo and his kitten :

thanks for reading!
- Sheera

I swear to God, she is asleep with her head inside this shoe.

also posted to my journal

Lola is still being a brat about getting potty trained. She knows shes supposed to go out but then she will just pee on the floor right behind my back.
Any ideas?

My boyfriend and I took Hog and Lulu to Lulu's cafe in West Hollywood today. We took these pics hahaha 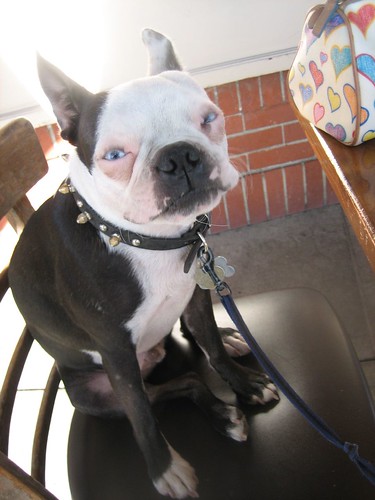 ( Collapse )
I haven't posted on here for quite some time as I've been lazy with the photos and such. Plus things have been progressing with Porsche quite well. My husband taught her how to shake a paw which he is extremely proud of. ;)

I have a question about Boston pups, though. Porsche is now 5 months old, and she seems to have enough energy for two dogs. She isn't destructive due to pent up energy, she's not destructive much at all. You can literally wake her up in the middle of the night and she will play with you. She loves running, leaping, climbing, playing tug of war, fetching and chasing the cat. And it's not like she'll do this for thirty minutes either; she will want to play at the same steam level for up to two hours. She learns new tricks REALLY quickly because she gives everything 110% of her gusto. My husband and I are wondering if this is normal? Is it normal for a BT to have this much energy every day?

I've never had a BT before, and I was very aware that they had more energy than your average dog, but I don't know if she's really overboard or if it's normal to want to go running all the time.

We are feeding her Eagle Pack (not sure if it's available in the US) which is advertised to help give dogs energy (I honestly gave the TV a withering look when it said this). I don't want to switch her off this food because it keeps her number, and piles of poops small and she is gloriously soft and healthy on it.

Other than that, she's doing very well. Seems pretty smart, she's healthy, and she hasn't destroyed our Christmas tree or any of the presents beneath. She likes cardboard boxes for whatever reason, and I was afraid she'd chew the presents. So far she is very much disinterested in the whole greenery. She is also getting spayed on the eighteenth of this month. Could this possibly calm her down?

Thanks everyone! I will post some Christmas photos of her soon!
Collapse