Schuyler is going to see the vet Saturday.  There seems to be something going wrong with my little old man.  :-\   His teeth (which have always been really good and clean) are rotting out of his head, he seems to have some growths on his gums and inner cheeks, a tumor on his tummy and a hernia that is noticably gettign worse.  Mommy noticed the teeth when he lost a tooth on monday, a big assed tooth root and all just fell out of his head . (well actually she found him playing with it.) So i was over there today and i took a look to see which tooth it was and the smell of rot almost knocked me over. He's also seeming to become incontinent.  :-\   And is messign in the house on a regular basis.  He doens't live with me its not my choice, if its something easy and fixable we likely will.  If not he will likely be making his trip across the Rainbow Bridge (and i dont' mean Bifrost or the one to Canada)  I've had him since he was 6 weeks old. I don't know how to feel.   My mother has heard that dental surgery is even very expensive, i think it would be good to at least get the teeth out.

So yesterday Michael, Onyx, Hog and Lulu and I went to the dog park. Hog gets sooooooooooooooooo much attention everytime we go. The people can't believe his blue eyes and the way he soars through the air to catch the balls.

refer to exhibits A and B 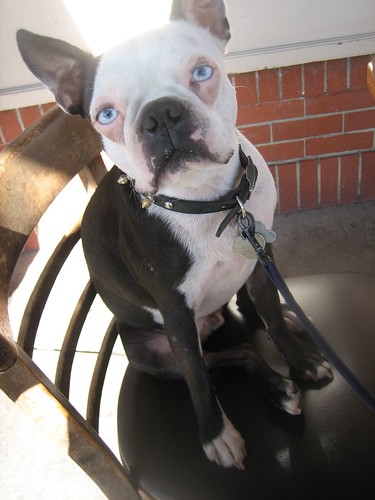 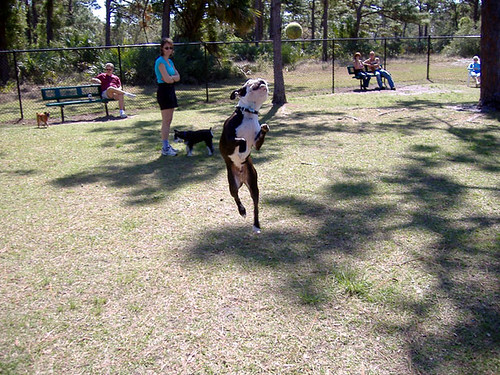 So Michael is constantly throwing the ball for Hog because that is all he cares about is the ball. Like right now he is laying on the bed right next to me with his ball right in front of him lol.

I see a lady walk up to Michael and say: "Is that your dog?" Michael says yes and the lady asks him if he wants to be in a commercial. Michael is like him or me?

The lady said both and I walk up laughing and the lady is like how about the whole family. We say ok and she says to follow her. I want to make sure she is for real so I ask what casting agency she is with and she names one I go to all the time. She hands me a size card I fill out with both Michael and I's information.

Michael says oh we have another lab running around here and then another lab at home. Do you want them too? The lady is like: "umm... no just the two terriers!" So I felt really bad hahaha.

The commercial is for pet food by the way. So we kneel on the ground, I hold Hog and Michael holds Lula. They take a polaroid and then the guy with the lady puts us on film. Just like how I am used to doing it at any audition except this time it's real and we are talking about our dogs.

They say callbacks are the 27th and 28th of January. Im thinking we will definately get a callback because everyone is obsessive over Hog. The day rate is 550$ which isnt much and then if you arent cut out of the commercial you get residuals. Come on Hoggie make us rich!!! God wont that be hilarious when I am the model in the family and Hog and Michael will probably be in a commercial together before I book one!!

Then today we go to the dog park again. We are standing next to a guy and girl and I'm not paying attention. Michael leans in to give me a kiss and whispers: "that's Jessica Alba right there." Sure enough she turns around and it's her! She was there with her Pug and Argentine Dogo. I thought the Dogo was sooo cute because it had one blue eye

If you go here: http://x17online.com/celebrities/jessica_alba/jessica_alba_may_just_be_the_hottest_most_boring_girl_in_hollywood.php

It actually shows her at the dog park with her boyfriend just a couple of days ago.

Tessa gets the itchies in certain places and does this lovely dance to alleviate the irritation...ignore the audio...enjoy the twirling!

I got Mac about three weeks ago, he has been to the vet once and is scheduled to go again on the 31st of this month. However, today for the first time I found worms in his poop. I am going to take him to the vet tomorrow... how concerned should I be?(because I am VERY upset and concerned...)
Collapse