I wrote to Arleen at the rescue group, offering to help in any way I could.

She and I have been communicating, and she just wrote me back,

"Ellen,
Thank you for caring both dogs were placed in loving, approved homes this evening.
Keep up your great work,
Arleen"

My husband and I just adopted a 2yr old Boston named Wilbur.
Wilbur was more than just a pet in the last household, they treated him LITERALLY like a human child... he ate human food almost exclusively (she made him a hot dog and a hamburger everyday for dinner!), he slept under the covers in bed, and was only bathed with human shampoo.

*sigh* Poor thing, so I'm glad we were able to adopt him... but I am having difficulty with switching him to actual dog food.
The only thing he wants to eat now is ALPO... and since I actually care about my dog, I can't in good mind do that.
He won't eat dry food... We have tried Nutro Lamb and Rice mini chunks, and Blue in Fish and sweet potato and buffalo both.... no luck. I even tried going raw diet with him... but apparently he is the ONLY DOG EVER who doesnt like raw meat. He just won't eat a normal doggy diet.

Now I know dogs won't starve themselves... (i have only been putting down the dry food to try and force him to eat it)... but at what point should I be worried that he won't eat? I have been trying to be good and not cave to his sad little face... but I'm not sure I can take it much longer!

Here's the little guy so it's not text only!
Thanks in advance!
*Sarah 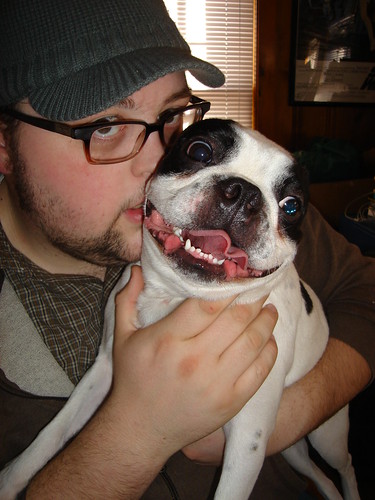 I swear my BT is turning into Beagle-dog. He loves to sit in the window and watch everything outside. Everytime he hears something out of the ordinary or sees someone walk by he gets up and howls "woof-woof-hahaoowowooowl"
http://www.psychologytoday.com/rss/pto-20060321-000003.html

I think this article especially applies to all the Boston lovers out there, doesn't it?