I made my cousin bring his fancy camera and we went all razzi and ish on the doggles. 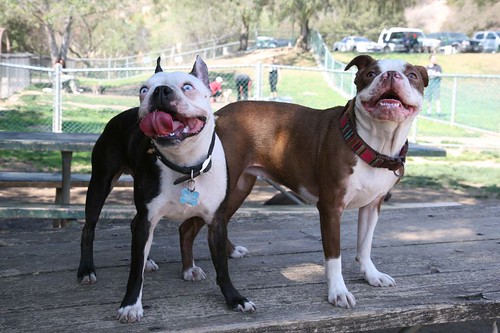 P.S I am in love with LilyAllen

Hi again! Niko here. I'm at work with mom today and we're having lots of fun! There's this watermelon bed that I can hide toys in, and play with the other dogs like it's a mini pillow cave!
( Collapse )


Our local fabric store is closing, and I found this on sale for 60% off. I could not help myself. My daughter is gunna end up with like 50 of these.

I had never seen a pattern for a stuffed boston before!

Our Boston (Frito) has been in an allergy study now for over 2 years. They finally narrowed it down to what he is allergic too, and now we have to give him a shot every three days for a year! He was fine the first couple of times but now he is scared to take them. The vet showed us how to do it, we grab the extra skin on the back of his neck and pull it up, then we insert the needle and push the plunger down. We have to aim it towards his head so he wont run backwards and jam it into his head further. But ever since last week he has been jerking his head as soon as we stick the needle in. Its very stressful for us because its something we just cant not do. It has to be done. Does anybody have any advice for us? Thanks a lot in advance!

Anyone else have a leapfrog for a dog? Gambit is a BIIIIG jumper.
He'll jump up on, or over, just about anything.

When he was a little pup he'd do running attacks at the couch to try to hurl himself up. He never made it until one day he just - landed. And since then he's been jumping up on the couch, despite my concerns that he'll hurt himself.

A few weeks ago, he dove over the back of the couch, which is about a four foot drop. Since then, he'll be hurdling the couch like it's nothing, despite my fears that he'll hurt his knees....

He jumps over people in leaps and bounds if they are sitting down. He hurdled my husband's shoulder.

He jumps up onto the TV stand.

He leaps towards people he loves. He stays on his hind legs for minutes at a time just, stretching and jumping. His favorite part of fetch is being in the air.

And so this isn't just a text post, here is a picture of my little man all tie-tie after all that jumping.

Tanner had his surgery today and he came out just fine. Now we wait two weeks for the lab results to be sure the lump is not anything bad. 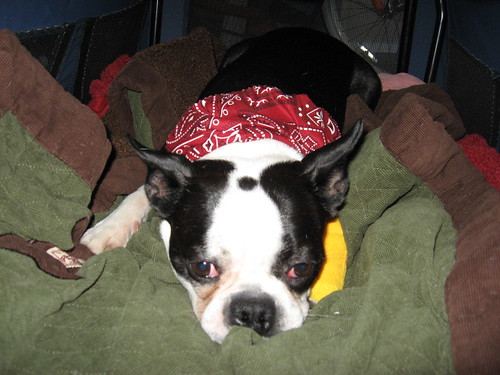 He was very sad when he got home. Even his Steelers' yellow bandage and the new red bandana didn't help him to feel any better. Me? I made sure he was ok, then I exploited my parents who were trying to keep me from barking and running around by demanding treats. 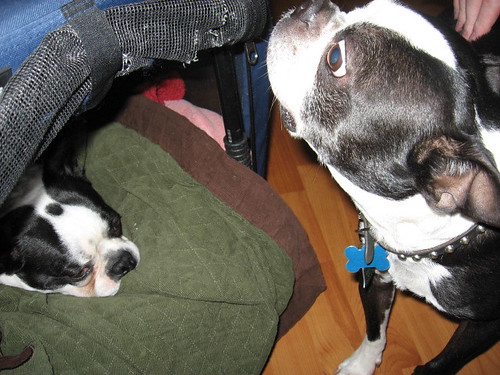 I made sure the Doofus was out, and then I asked Mom for a special favor...