Why is my pup such a crybaby? He cries CONSTANTLY and I don't understand it. He'll sit next to me on the couch and make tiny whiney noises and I don't know what he wants! I'll bring him toys, try to hug him or rub his belly, he just kind of sits there mewing like a baby cat. Even when he's playing (say, chewing up his big rubber toy box) he will cry. "Chew chew whiiiiine chew chew". It's so silly! I don't know what he wants. Sometimes he looks at me and I think, "What do you need? Am I neglecting you?"

I don't think he's ill or in pain because he acts normally most of the time, but when he sees me, the little meows begin. I've told him firmly not to cry for attention, and ignore him, but it gets worse.

Is it just me?

Just got a call from the Vet, Tanner's lump was benign. However, he still has a severe case of Doofus-ism, which seems to be resistant to all treatment ;) 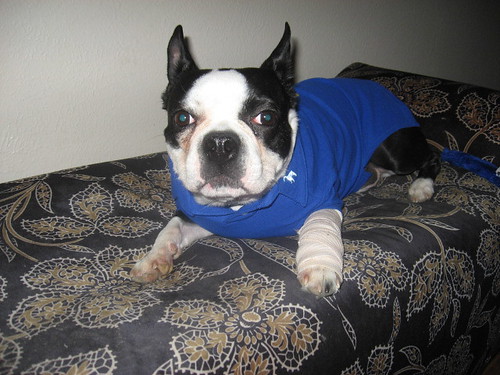 Ok.. first off thanks for the comments. On my lunch break I drove by the house because I needed to get the address. I had treats in my car just in case they were loose again. I think from now on i'm going to be carrying doggy treats in my car. Anyways, I called Animal Control and tried to give the woman who answered my story.. but she kind of cut me off telling me all she could do was give the address and the description of the two dogs to the dog catchers and it's up to them to determine whatever it is they have to do. I was very upset with this answer. I felt no relief whatsoever in calling them. Basically she said all I could do was in a couple of days go and check the dog pound to see if they had been picked up. It doesn't sound very promising at all. It makes me want to stake out the place even more and take those puppies away from her. =/
Collapse