I don't know if you can see that thermometer back there, but its been way way too hot here.
( Collapse )

Genevieve just called me about Lulubelle (hogs sister)
she's being rushed to the vet because her blood test shows she's in kidney failure.
Genevieve's on a job and Michael had to take her so that's all the info I know.
She took her to the vet today and they did a blood test..she's got skinny and wasn't eating much.
Please be thinking or praying for Lulu and G, she's so so upset as you can imagine. 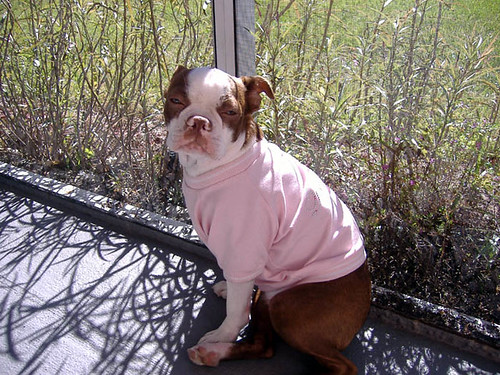 So, Clancy is 4 years old. We decided after much persuasion by a co-worker, to take him to the dog park to start him on the path to being socialized. He's NEVER been around dogs off-leash.

It didn't go so well.

He got swarmed by about 7-8 dogs when he first walked in (there were like 6 bostons there!), and while scared crapless, he handled that OK -- he was trying to hide between my legs and his pappa's legs, but he wasn't being mean. Then one dog accidentally came down on top of him (it was a boston that jumped up with his front legs on my fiance's knee to say hi, and when he was getting down, he sorta landed on clancy's back and startled him), he snapped and bit the other dog, who bit him right back -- nothing serious.. typical dog-hierarchy type stuff.. but unsettling to the humans as much if not moreso than our pooch...

Things didn't get much better from there. He snapped at a few more dogs.. Once he even came back with a tuft of hair from a coworker's dog stuck on his jowl (how embarrassing!). Then at one point someone was throwing a ball for the dogs. There was one dog going after it and clancy actually left the bench where we were and looked like he was going to go play. I got really excited as he ran and went to grab the ball -- but then he grabbed the other dog's leg instead! Again it was just a nip, but I felt so awful -- between feeling bad that he was hurting other dogs AND that he was really anxious.

And then, it poured. And Clancy didn't have his raincoat.

So all in all, not a great trip. I'd like him to have the chance to run and play with other dogs, but I'm not sure at what point I just decide that the dog park isn't for him..

Does anyone have stories about awful first trips with their pooches, preferrably pooches who now loooove the dog park?