Some pictures of Patrick and his roommate/gay lover Samson.

He likes to sleep like this a lot -- to sun his tummy on my bed, under the skylight.

Hello everyone, I'm Autumn and I have 2 year old boston terrier named Chopper. I am utterly obsessed with him and take like 348785 billion pictures of him, so I'll probably be posting alot.

I was out of town for a week and I swear I came back and Maple has grown a whole bunch. She is such a fat little beast.

Also, I want to let everyone know that Diesel found a home. So hopefully this one finally lasts! <3
( Collapse )

My husband and I got an 11 week old Boston on Weds. and named her Coco :o) We both grew up just outside of Boston and have ALWAYS wanted one. And for my husband being a huge Red Sox fan, he insisted on naming her after a player so she was named after Coco Crisp. She's our first puppy (we have 2 other dogs that were adopted as adults from shelters--a chi-weenie & a cocker lab mix) and is SUCH a doll :o) I couldnt be happier! 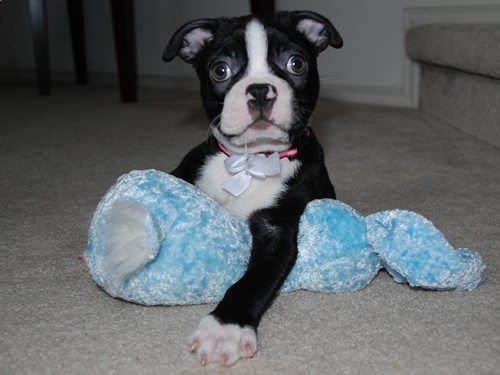