As long as she can still sunbathe her tummy once in a while... 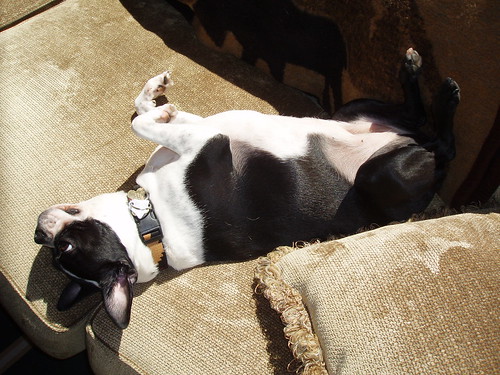 This is why Baxter now has a bed on the floor!

And is it sad that I really want this statue for the front garden?

And since when do I even look at Danbury Mint stuff??? I really am turning into a crazy dog woman!
I recently posted pictures of my new puppy aires. but now there are some concerns that i have. One is he tries to suckle on the other dogs, and the other one is he's well how can i say this nicely. Eating his on poo. What can i do to prevent both of these things???

I is Mommy's best fashion accessory but dese shoes are no bad either.

Capella and I are back from her first vet appointment! She's got a clean bill of health and her third set of puppy shots yikes. She got some worming medicine 'just in case' and we had to bring a little bottle of it home with a syringe to feed her it with. I'm sure that will make for an interesting time lol. Got some free heartworm meds, front line sample, and bag of Science Diet. I might try it out when we get closer to the end of this Purina Pro her breeder had been feeding her. I like that the science diet is sold at the vet and the BX which are both much closer than the petsmart that sells the purina pro. Everybody at the vet loved her and now I'm concerned she's a bit of a puppy slut hah. She definitely kisses & tells and here I was thinking I was special. She loved on nearly every vet worker there and even the vet made a 'french kisses in the afternoon!' remark. She's a lover for sure! She weighs 8 lbs 7 oz. Anybody remember how much their bosties weighed around 3 1/2 months compared to how much they weighed full grown?

And for the record I didn't wear my new boston shoes to the vet because I didn't want to look too obsessed hah.

Today my little one, Brad-Pitt, was diagnosed as having a compressed disk. He had been limping for about a week so we were super concerned and took him to the vet. He is now on two medications: one anti-inflammatory and another to boost his cartilage, which he'll be on for life. The vet said he should refrain from rough housing with larger dogs (which is what caused it in the first place, my father-in-law has a boxer) and should generally take it easy for the time being.

Have any of you had this experience with your Bostons? I'm so so so worried for little BP. He was always and continues to be such a happy and healthy dog, it breaks my heart to know that he could be in any discomfort or pain - and even more so that he could struggle with a bad hip later in life. :(

So any advice or just comfort would be great.
♥
Collapse