My boyfriend and I are looking for a dog. I'm considering a Boston Terrier. Could you guys let me know from your own personal experiences some pros and cons? Any help would be greatly appreciated. Thank you :)

This has got to be the goofiest face I've seen her make in awhile...

Tessa came over to visit on Saturday afternoon. Ruby and Tessa had a grand old time chasing each other around the yard.

Tonight I took some photos of Ruby... 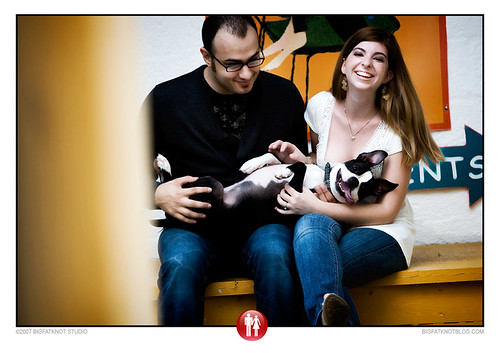 My fiance and I just took our engagement pictures with our little Boston, Brad-Pitt, in tow!!!
By the way, he is feeling a lot better as you can see from these pictures!

In Toronto today we reached an all-time record high temperature for October, beating out the last record from almost a century earlier.

Gambit is so hot. We have the fans on but the AC isn't really kicking in because it's been cool lately so we haven't been using it. Gambit is so uncomfortable, he is so restless because of the heat. I feel bad. He is drinking nice cool water which I have in almost every room so he can find it. I gave him some ice cubes to chew. But I don't know how to cool him down. My hubby and I have a spray bottle to mist on ourselves in the heat, but Gambit both hates and fears it, which makes no sense since we have never sprayed him with it. But sometimes when I spray myself he gets little droplets on him and he recoils in horror, which is funny except now he is hot and I can't think of how to cool him off. We let him splash about in the cool bathtub with a bit of cool water on the bottom of it but he doesn't like it at all and keeps trying to come out.

How do you keep your babies cool?
Collapse