Today the birthday of J.R.R. Tolkien, creator of Dwarves and Elves and all of Middle-Earth, who was born this day in 1892. Everyone is invited to participate in The Tolkien Society's International Birthday Toast for 2008.

110 years after Tolkien was born, our bouncing baby Boston came into this world: The Shire's Virginia Lórien, a.k.a. Virginia, our very best friend, who was born this day in 2002. We love you, Sweetheart!

Here is the picture with which she won the title of Cutest Pet of 2007 at Lenoir-Rhyne College; they added the crown to the photo after she won, and then they hung it in the Student Center for the entire fall semester. 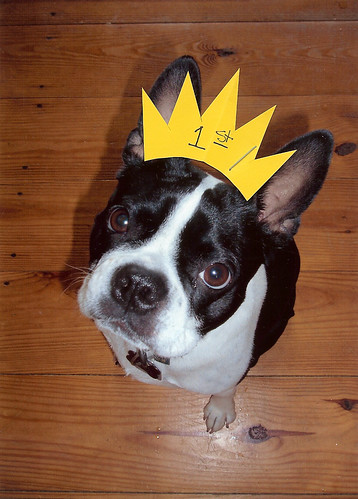 More pictures of Virginia are here.

By the way, thanks to everyone who responded to my request for advice about her chapped ears. We're using Bag Balm on her ears and dressing her in a hoodie for her daily walks, and now her ears are in terrific shape once again! I appreciate all the helpful suggestions you gave us.

Any advice for getting your BT to wear goggles? I bought a pair on a day when my little man was being very well behaved and seemed to love being held by all the store clerks with his new goggles on (he loved flirting with the girls although hasn't learned passing gas while being held won't pick up the ladies). Now of course when he wears them he wants them off. He needs to wear them while he plays with our cat and he'll get his last of the puppy series shots tonight allowing him to play in the dog park that's very dusty so eye protection is probably a good idea.

Right now the only thing that seems to work is putting them on when he's half asleep. Naturally when he's wide awake and hyper is when he wants to attack the cat with sharp claws and we haven't figured out what to do with her claws yet (discussing at vet appointment tonight/they're only allowed supervised play time right now). He hates hats so I don't bother putting them on but I think with the cat and a dusty dog park the googles are something he's going to have to learn to tolerate.

Ok. I have a few breed-related questions. My new Boston has hoover-like tendencies. I swear to you, if it's on the floor, it's in his mouth no matter what it is. This freaks me out a bit because the last thing I want is to have to rush him to the vet for an emergency surgery. I've been pretty diligent about dropping stuff or leaving anything within his reach that might cause him harm. Does anyone else have problems like this? Any advice about how to curb this bad habit?

I also noticed he has a hard time with stairs. He's got a strange gait, which just seems normal for him. Not like a deformity. He's also super-clumsy. Is this normal?

Other than these few things, he has been doing great. He's a real momma's boy. Follows me around EVERYWHERE and loves to snuggle up to me as close as he can on the couch. He even goes as far to smush his head between my arm and my torso to make sure I'm touching him. So cute!

He's doing really well with asking to go outside when he needs to go, even though he knows it's freezing outside. Such a good boy! I've also discovered that he can't have plushy toys because it takes him very little time to have de-fluffed it. Today he surgically excised the fluff and squeaker out of his Charlie dog toy. Looks like I have to go for the more heavy-duty toys. Hehe!

His Pomeranian sister is starting to warm up to him some more and I caught them actually playing together earlier this afternoon! She also slept on top of him on the way home from my parents house the other day. We had a good chuckle over that.

Anyhow, I appreciate any advice you guys can give me. Happy New Year!!
Collapse