Alright guys, I've got another question. Now I KNOW that I shouldn't get a dog based on price, and I DO NOT plan to. With that being said: how much should I expect to pay for a healthy Boston pup? I've been checking the local papers, and I have seen sort of a large price range over the past year or so...from about $200-$500, I think. Oh, and if this matters: I just want a loveable pet, I'm not planning to show.

And I'm very sorry if this is a dumb question =(

Banjo graduated from puppy preschool last week and is doing well with all his new commands and tricks. I am noticing that not all treats settle with him. Any advice on ingredients to avoid in dog snacks or is this possibly part of the puppy stage where they can't digest everything? I thought he had a stomach of steel but I'm finding some treats will give him diarrhea. So now I end up throwing half of his treats away. For his regular food he's on a good organic diet from one of those dog boutiques. As for snacks those come from anywhere. Some cheap grocery store things no problems others and it's runny stool. I had a gift certificate to Omaha Steaks and ordered him some biscuits from them. Yet another thing that doesn't sit well in his tummy.

Charley is an amazingly good baby. He doeesn't nip or bite - ever. He doesn't go after objects while you are watching. However, when he's alone, he turns into a different puppy. He eats Things. Especially electrical objects. We tell him he's going to be an electrician when he gets big.

It seems his favorite source for enjoyment is electrical plugs. No matter what barrier you put in front of a plug, he'll search and destroy it. Here's an example of a recent 6 plug unplug adventure for him: 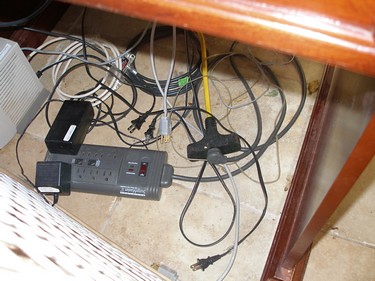 Of course, we've installed ground fault interupters on anything near him, but it seems to almost be a game of how many plugs can I get to.

And he ate the connecting wire for an ipod, the velcro and 3 buttons off of one of Rory's coats, and an entire Pottery Barn hooked rug. Plus a book: 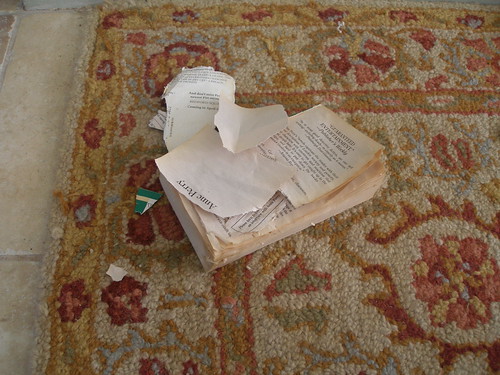 You wouldn't think that innocent face could get into that much mischief. 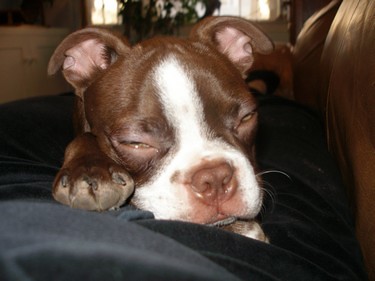 Of course, we're spoiled since Rory would never dream of chewing anything or going after wires. She was the dream puppy!

I've noticed that there seems to be a high population of owners with younger dogs (like 5 and under) and I was wondering how many here have older Bostons? Smudge turns 9 May 20th, and I can't believe it's already been that long!!

So how old are your babies??
Alright I have (yet another) question. Is it really so common to buy a BT that is sickly? I mean, I've heard a lot of horror stories about these dogs.  I mean, is it a good chance that I'm going to end up with a sick puppy, here, if I don't sink a ton of money into it?

Also, I live in the Syracuse, NY area, and it was suggested several times in response to my last post that I should adopt. Does anyone know of any BT rescues close to me? I keep checking petfinder, but the closest available BTs listed are well...not very close. I also check the SPCA and Humane Society regularly. Other than that, all I've been able to locate were a few listings in the newspaper, and honestly, I like the idea of adoption better than buying a new puppy.

ADORABLE.  The breeder was going to kill them for demodex mange.
"This is not a life-threatening condition. Of course, it just means that one or both of the breeding pair have a genetically deficient immune system, which also means they should not ever be bred. Since these "backyard" breeders had been breeding their Bostons quite a while, they knew this. But, like most people who buy a pair of "pet-quality" male and female purebred dogs with AKC papers to generate income, the breeders didn't care about the welfare of the dogs they breed--only the $$$ from sale of puppies, puppies, puppies. So, of course, these "backyard" breeders weren't really concerned that the other puppies in the litter could have a Demodex outbreak (or NOT) at any time--only about unloading the "merchandise" before such an eventuality. But they were unable to "beat the clock" in the case of Winnie and Fonzi. "

Read the rest on their profile.
Collapse