laineylj's eye is going to be removed =/
(in case you missed the back story... Part 1 and Part 2)
The doctor really felt bad, you could just tell. He didn't really want to recommend the eye removal, I could sense him being apprehensive...soon as I suggested that I thought that would be the best route for all involved he instantly jumped in and said that is what he wanted to do. I guess it is kind of hard to tell someone their family pet needs to have their eye removed.
She still seems to be feeling as good as one can feel with an eye in that condition, but you can tell she is annoyed to no end. She's also having some hard time adjusting. Walking into things, constantly pawing on that side, etc...
What I hate is that she had to go through the first round of surgery and now she has to have it removed.
Not to mention the bill for this, they took good care of us for the first round but I don't know how today's surgery is going to hit the wallet.
So... I'm not going to ask or beg, but if anyone would like to donate...

Any help would be appreciated because this honestly could not have hit at a worse time. My wife is taking it very hard, Lainey has always been our baby girl...but she is REALLY Amy's little girl. Amy is just kind of blaming her self, and like I told her...there wasn't much of anything we could do. Dogs play, even if we would have stopped them from playing and pawing, odds are by the time we stopped it, well it was already too late. We took her to the vet quickly and we watched it all weekend.
By the time the damage was done it was already too late, nothing anyone could have done. We're still not sure if the other dogs had anything to do with it, she could have run into something. If you remember years ago in Louisiana she cut herself real bad, the other dogs had nothing to do with it.
We call the vet back this afternoon, didn't think to ask if she would stay overnight or not.
I'll update when I know more, and hey maybe she can be a pirate for Halloween now!
You can see some photos of the day old pups here. 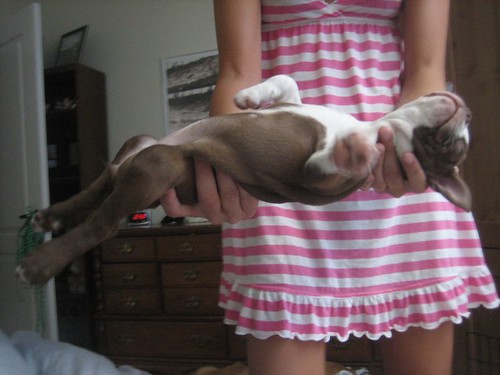 Ok here on some pics of my little Pancake
( Collapse )
Collapse