My boyfriend and i just recently lost our Boston terrier Makki, we have another one that is about the same age as him that we got as a rescue, from what we understand from the previous owner, Pizzy or "piggy" as we like to call her has never been with out other dogs. Now that Makki is gone we are finding out that she is having a hard time adjusting to being alone in the house. I usually work the early shift so i'm usually home after 3 and corey usually doesn't go to work until about 8-9 so that leaves her in the house alone for about 7 hours or less depending on my schedule. I've been out of work for about a month now due to complications with a kidney infection so she really hasn't been caged since then and its only been about 2 weeks since we had to put makki to sleep, but it was friday that i went in and when i came home she was howling so loudly i could hear her outside the house with my stereo on and her room is in the basement. she's been so depressed lately that i've had to hand feed her and give her water out of a drinking glass. i'm so worried about her because she doesn't seem like the same pizzy since makki's been gone. corey and i want to get another baby but were not sure if a male or a female would be the best or what we should even do. i'm not sure if we are ready to get another one so soon but i hate the way piggy is acting.

took violet on a loonnng walk around the city today. 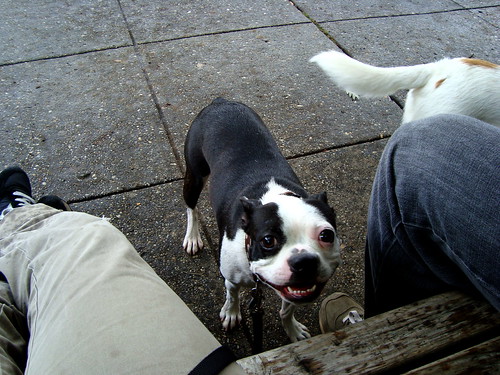 on the way home we came upon a festival in a nearby neighborhood. we had to carry her so she wouldn't get stepped on. she loved it. 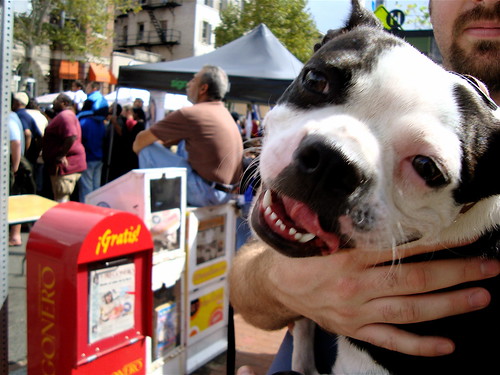 This is our new foster, Hazel. I have a couple of questions about her and I'd appreciate your help!!

She was rescued from a backyard breeder who had so many pups, the state forced her to relocate them. Hazel is reportedly 7 months old, though we're suspicious of that. She has her adult teeth, weighs 13lbs (with very tiny features), has protruding nipples, and her female parts seem to be a little stretched. Could all of this be possible at 8 months?

She is also snippy with Penny. When we introduced them, she growled and lunged. It calmed down with clapping and loud NO's. We took her to an adoption event - a Woof-a-Palooza music/dog fest thing at the park today and she did pretty well. We took Penny since she's such a positive example of the breed. Toward the end (about 3 hours in), Hazel was just sleeping on my lap and Penny was next to us and she must have moved and Hazel woke up and instantly lunged onto Penny, put both of her paws on Penny's eyes and latched onto her jowles!!!!! Needless to say, we freaked out and screamed, which stopped it... she just seems to have really been startled. Penny was unharmed, though!

We're trying to give Hazel a fair shot at keeping her foster home with us. She LOVES human attention, is great with our 2 cats, and is reacting well to positive reinforcement. I think, coming from a breeder with a billion dogs, she's territorial and wants to assert herself. Penny mounted her from behind today to show some authority, but obviously Hazel still attacked her pretty viscously today. Does anyone have any suggestions???

Hazel really is a good dog and I don't mean to make her out to be anything other than sweet. She's already learned "sit" and "down" in 24 hours, lovessssss to cuddle, and really is warming up. I'm just concerned about the aggression and how to handle it.

For good measure, and because she's sooo cute, here are some more photos! 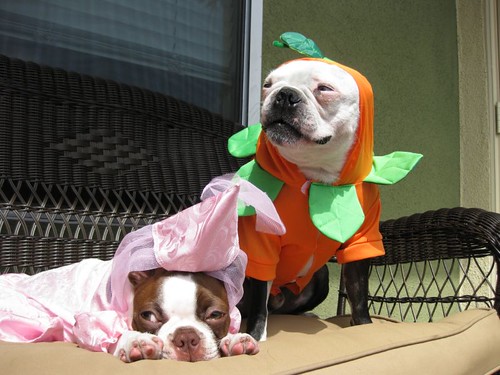 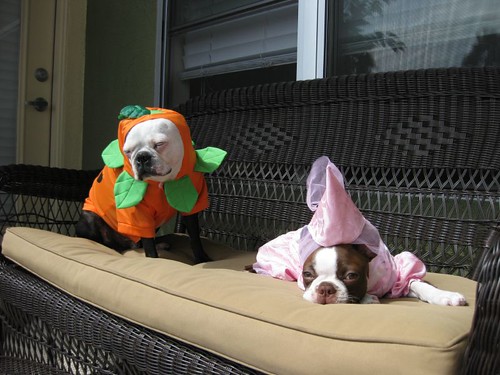 So Im new to the whole bully stick market,any healthier brands?Any brands I should stay clear from?Or are they all basically the same?