I thought I would take the time to introduce myself and my stink-bomb puppy, Gizmo.

I had been looking into adopting a Boston Terrier for about a year before I finally decided I was ready. Through a strange set of occurrences I met a fabulous lady through the Boston Terrier board who was involved with the local rescue. It seemed like it all happened overnight, but I had my inhome visit on a Thursday and that weekend my roommate, boyfriend and I all traveled out to the foster home to meet my little guy.

It was definitely a no-brainer, he was coming home with us come hell or high water! I am so in love with this little guy...he definitely found the right family when he came home with us...and us with him.

sjdougherty and I live in Central NY with our two bostons: 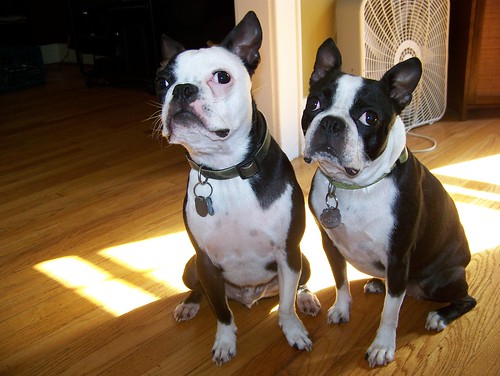 That is Henry on the left, he turned 3 in October and Reggie is on the right. She turned 5 in December.

My name is Jenny and my husband and I have two furbabies named Gambit, aka Chunkapup, aka Mr. Moo, aka Mr. boo-hoo moo (he whines a lot), and Daisy, aka Deezer, aka Dee-Dees, Aka Furious D, aka El Tailio Diablo.

Gambit will be 3 on June 25 and Daisy will be 1 on March 31st. They are second cousins and they love each other and fight like two goblins tied up in a sack. They couldn't be more different. Gambit is a very solid 24 pounds, his ears don't go up, he loves to cuddle, is very lazy, and whines all the time if you don't spend 100% of your time giving him kisses and rubbing his belly. He doesn't really have a tail, just a "fluff-o'-nothin'" as we call it that looks tacked on to his bum like Eeyore from winnie the pooh. Daisy is about 13-14 pounds of lean muscle, has bat-like ears, hates being picked up, is thoroughly independent, and looks at us as the people who bring her toys so she can play with her brother. I don't think she sleeps. I suspect she is secretly a cat. She has a powder puff tail.

Both were purchased from the same breeder, a family who raises Bostons and bulldogs for other families. We live in our house in Ontario with two budgies who provide background music to the spoiled, pampered lives of our two babies.

These are the only pictures I have access to at work:

this is my man Sammy, age 3, currently living on Maui with my parents.
We had some guests over and he couldn't contain the excitement.
The image is cropped (and he's fat - my parents spoil him - he is about 30lbs!) but too funny not to share (we are trying to catch him, he is as fast as a bullet):

I'm Lynda, and my husband Jef and I live in Houston, TX with our almost three-year-old Boston, Molly, and our two cats, Melody (9) and Louie (8).  Molly is our first Boston, and we would really like to adopt another one after we move in a few months.

Hi Everyone!
I am Susan and am owned by 4 Bostons and a Rottie (as well as 2 birds).

They keep me very busy and very amused and I love them more than anything! Hi everybody. I'm Trina and I live in Temecula California.

About two and a half years ago my new husband and I decided to get a dog. I wanted a Boston and he wanted a Pug. We ended up with Louie, a Bugg. This past April I still wanted my boston so we added Marley to our family, which also includes a yorkie named Scooter and a cat named Stormy. We are Lola Mae and Maple Syrup and our mama is Michelle.
We reside in Canyon Lake, CA which is in southern CA.
Lola will be 3 in summer and Maple will be 2 in April.

Hi Boston Buddies! It's so great to see old friends and make some new ones with these introductions. I'm Elizabeth and I'm owned by our 10 year old Boston, Bella. Actually, she's really my husband's dog - a true Daddy's Girl. I don't really exist unless I have the food :) 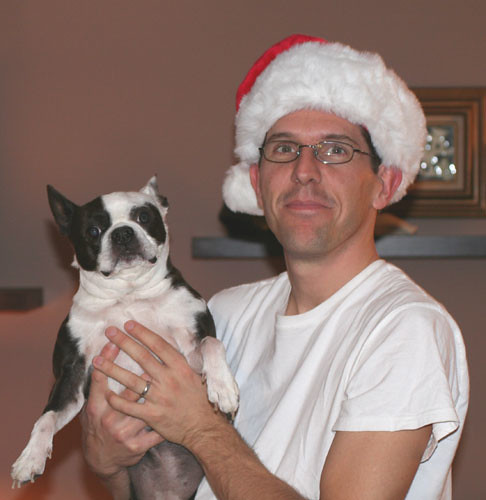 This photo is from Christmas 2007. Five months after this, Bella underwent successful surgery to shorten an elongated soft palate that was making it really difficult for her to breathe. Unfortunately, a couple months later, she was diagnosed with Cushings Syndrome.

Bella is doing well; we keep her happy and comfortable. But she does have some hair loss and lumpy skin caused by calcification (a great excuse to dress her in cute sweaters). She also has the typical Cushings pot belly. I'm not posting a current photo because some people may be upset by her appearance. Of course, we love her no matter what she looks like. 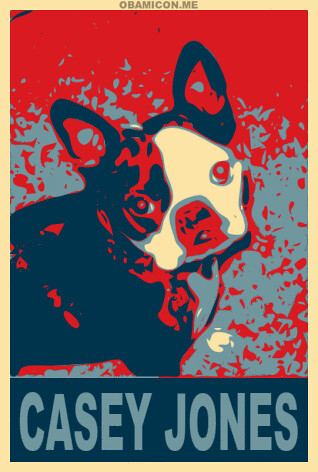 I'm Jess and this is Casey Jones. We live in Albuquerque and Casey is almost 4 years old. I adopted him in April, 2007 from the city animal shelter. My sister-in-law knew I wanted a BT and saw him on the animal shelter's website. So she and I raced down to see him. We walked all over the place (it was heartbreaking!) and couldn't find him anywhere. I went into the shelter's office and asked where the Boston Terrier was. Turns out that he was being held in a kennel in the section of dogs who were not eligible for adoption due to illness, injury or violence. He was there only because they'd had no other free kennels. He had been picked up as a stray and had even had tags. They shelter employees had been calling the number on his tags, but there was no answer. So he became mine.

Casey can be very naughty. He learned how to unlock and let himself out of his crate. He can open the kitchen cabinets. He can jump into my car, through the driver's side window, when the car is parked in the garage. He is clearly smarter than I am and he infuriates me on a daily basis. But he never fails to make me smile.

To this day I will never be able to understand why someone could give up such a lovable pup. Unless maybe they couldn't deal with all the farting! Anyway, no matter the reason, I'm grateful for whatever happened to bring him into my life. He's my first Boston and certainly will not be my last. I've been considering finding him a little sister one day soon.

It's been a good long while since I joined the comm and I've been pretty slack in posting/commenting lately, so I figured I'd reintroduce with everyone else ^_^ I'm For-Chan and we have two Bostons in house, Niku and Scutter. I also have a doggie nephew that I babysit every few weeks, Opie. Scutter is the oldest, she'll be 12 this year. Niku will be five and Opie will be turning three. Niku and Scutter want food. Or tummy scratches. Both are acceptable.

i'm from pittsburgh, pa and my partner and i have one full bred boston and two
beagle-boston mixes.
after all of the other posts, i figured it was time to get on board! 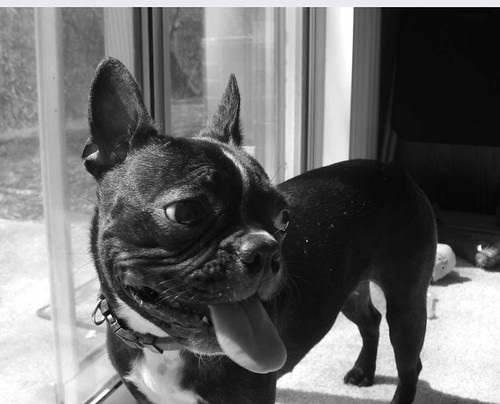