Hi my name is Genevieve. I live in Los Angeles with my boyfriend and our four dogs. Two of which are boston terriers.

Left to right: Onyx, Hogwarts, Clementine, & Phoenix
I have been a member of boston_buddies since 2003. At that time my bostons were
Tinkerbell (13)
( Collapse )
</div>
and Rebel (7)
( Collapse )
</div>
In 2004 I got my baby Hogwarts from a breeder. He is named after the school in the Harry Potter books
( Collapse )
In 2005 Hog got a sister named Lulu Belle. Lulu Belle died July 19th 2007. It was the worst thing that has ever happened to me. The people in this community were there for me through the whole horrible thing. I am forever grateful for their support and love they showed Lulu and my family.

Lulu Belle died of renal kindey failure. She was born with deformed kidneys and we didn't know until she got sick. They say dogs that are born with this deformity only live 2 years. She died 2 weeks after her 2nd birthday.
( Collapse )
</div>
I got Lulu's name tattooed on my ankle. Now she is forever at my heel
( Collapse )
1 year after Lulu passed one of my friends from this community let me know of red female bostons that needed homes. I went to the website just to look. There were also red male bostons that needed a home. One of the male red bostons was Ricky!! Lulu's dad! Then I noticed a link that said puppies.

The puppies were from Lulu's Dad and a female named Ember. There was only one female puppy left. I knew I had to have her since this was Lulu's half sister.

Clementine is now 7 months old and we love her so much. She does so many things I have only ever seen Lulu do. No other dog. Sometimes we wonder if Lulu is saying "hi!"
( Collapse )

I take a picture of her every month on the 16th. Here is her picture from that day 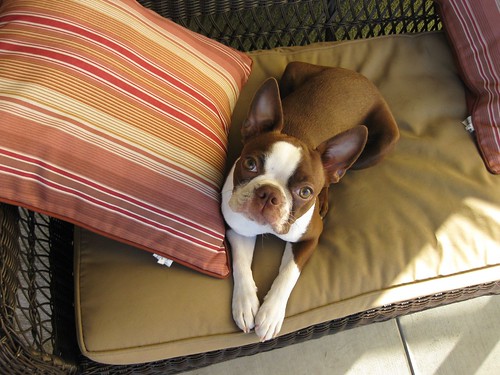 Clemmie plays fetch now. It came on all of a sudden but she loves it. She is so sweet and cute about it too. Nothing like Mr. Hogbutt.

We are so in love with her. We have 4 dogs and I secretly think she is my boyfriend's "favorite." He is obsessed with her. Every morning while he is getting ready for work: brushing his teeth, fixing his hair etc. he puts her on the bathroom counter with him!! Then uses his comb on her and brushes her teeth!!! (with her own toothbrush)

This was posted on ihasahotdog today and I had to share cause it's so cute!

I am proud mom  to Zeus.  We live in the San Francisco Bay Area.

Zeus was a rescue from our  vet.  The vet got him from a puppy store owner.  Zeus had a horrific case of demodectic mange when the vet got him.  They were going to put him down, but he had such a good personality that they decided to try and save him instead.  I came in to get my cat a check up, and the vet tech said, "Hey, have you ever thought about getting a dog?".  She brought out a completely bald Zeus, and I was in love.

He still doesn't have a good coat, but at least he's not bald any more.  And he's as spoiled as a dog can be.  He's great with my three boys, and even tolerates the rabbit we adopted last fall.  He loves to travel and goes camping with us all summer long.  Here he is one one of our camping trips: 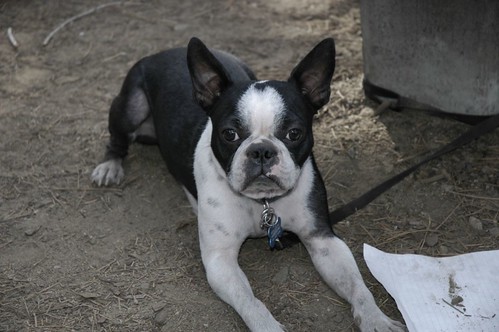 And here he is (most unhappily) on our trip to Tahoe last winter: 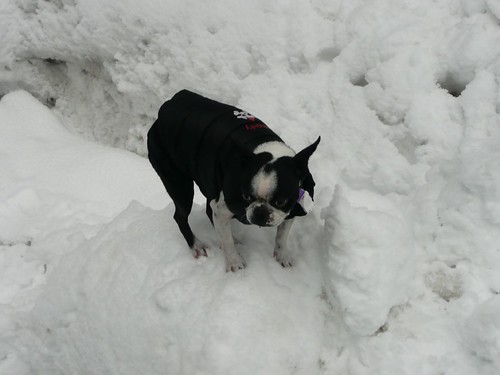 I used to be actively involved on Boston Buddies and then shifted into lurking mode after I started a blog for my dogs. But I still read every post and ooh and awwe over all the cuties on here. I have been on Boston Buddies since 2003 and I am the proud owner of Joseph Stains and Tanner 'Doofus Face' Torkelson. 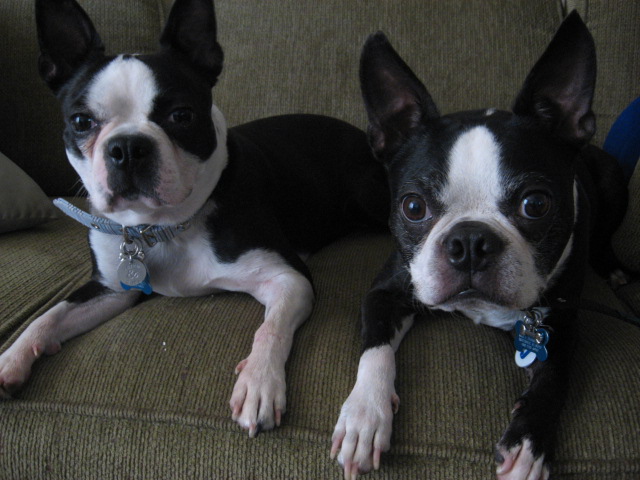 Tanner is on the left and Joey is on the right.
Collapse