My little puppy Daisy is very sick. But she is in the hospital right now. I feel so very helpless. I feel like this is all my fault. This is the week her vaccines are due and her heartworm medicine is due and I haven't done it yet, I was going to do it all tomorrow morning because I was busy today, but now she is sick. I know it isn't heartworm or rabies, so I don't see how her vaccines would have helped her, but maybe bringing her to the vet last week would have helped them see that she was sick. I kept telling myself "her checkup is the first week of August, so when she goes, mention that she is rubbing her bum on her brother, mention that she has thrown up a bit lately." And now it's too late. :( She was so sluggish today and didn't want to eat or play and she threw up SO MUCH and she was so ill so we rushed her to the emergency vet where she is now.

I really hope she gets better. The doctor said her kidney liver and heart sounded/felt fine, and it isn't Parvo, but she has an infection and a fever and she is bleeding from her intestine. :( I suspect she has eaten something that has made her sick. The doctor said she might have pancreatitis, or some other infection, but he is worried that she is bleeding inside. I really hope something isn't lodged in her little belly or intestine. I will totally pay for the surgery if she needs her intestines done or a blockage removed, but her hospital visit is already incredibly expensive and I just can't believe this is happening. I wish she wouldn't eat every goddamned thing she sees. I just can't believe what she could have eaten, I have been SO CAREFUL because I am SO AFRAID she will eat a pin or some glass or something. She really likes to eat anything crunchy. What if this time she isn't lucky and it cut her up inside?

The doctor said the biggest concern was that she is vomiting yellow, which means her stomach might have something wrong with the lining ( I totally didn't know that yellow bile was bad! I throw up yellow bile all the time, and Gambit has once or twice! I didn't know it was bad! I thought it just meant it was her empty belly since she wasn't eating) although she didn't vomit blood, and the blood in her stool and her foul diahrrea. So I am just praying praying praying that she will be okay. They are calling me in the morning. I am so so so afraid.

The vet called just now. Daisy's bloodwork has been okay so far but isn't finished. He said she is very weak but no longer vomiting or having diahrrea. He wants her to stay on the IV at the hospital today and they will finish the tests and he will call me when he begins his night shift. My husband thinks they are scamming us for more money keeping her all day (an extra 400 dollars to add to her 1400 dollar bill of the previous night) but I don't care!! She can stay there if they say she has to!

He said her poor wee stomach was very inflamed and she has gastritis, to start with, and they are still examining her intestines. Hopefully they will be able to treat it. I think she must have finally swallowed something she couldn't just pass. Hopefully they will be able to fix her. I'm very worried still but at least so far nothing too severe, I have read online that gastritis is treatable with a special diet and medicine. My biggest fear is that they will find she has damaged her intestine. I know those surgeries are very expensive. I'm paying the money, obviously, but we really don't have a lot to spread around currently, so I'm crossing my fingers.

Gambit is very confused about where his sister has gone. He keeps looking for her. It's really sad. :( He went to her crate this morning and seemed very puzzled that she wasn't in it, since he knew she wasn't in the bed with us last night. I hope he'll be okay today. I hope Daisy will be home with us tonight! 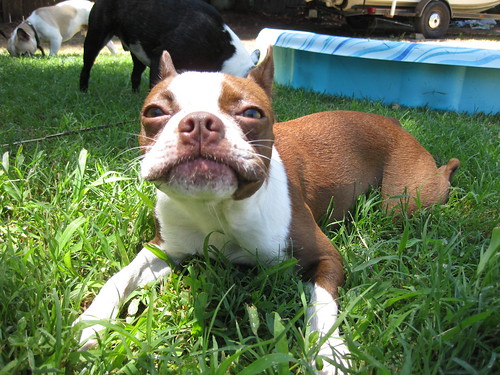 Friday I woke up, and took Hog and Clem on their walk. An hour later my boyfriend told me to look at her paw. She was limping on it and it had a bump that looked infected. She stopped limping on it right away. I thought it was a spider bite. The next day it was still the same so I squeezed it a little and a ton of puss came out.

I planned to take her to the vet on Monday but it looked much better monday. Woke up today and it was red again. So I just got home with her from the vet. $250 later...

They took her in the back and looked at the cells from it under a microscope. The first thing she says when she comes back into the room with Clementine is "I didn't see any cancer cells. It isn't uncommon for young dogs to have cancer." I am about to throw up because this cannot happen to me again!!!!!!!!! With what I went through with Lulu, Clementine needs to live to 100!

She said she saw some "mass cells" and wants to send them to the lab. ($150) I asked if it's normal for a hematoma or cancer for that matter to just appear (like a bug bite would) in an hour. I would think hematoma's start off small and grow? She had nothing on her paw when I took her at 6am. Then at 8am she had what you see above.... So the Dr. said she couldn't see much because of all the blood and puss.

Whatever it is it's really infected. She has two different medications for that. The lab results take 3-4 days. I am pretty sure they will come back and say bug bite... and i paid $150 for them to tell me that... but I want to make sure it's not something major.

Have any of your bostons had anything like this??? She said she DID not see cancer cells but she still scared the shit out of me.

Oh and she has luxating patellas in BOTH her knees. The Dr, said hers isn't bad at all though and would only need surgery if she started limping.... UGHHHHHHH

just found out about a cream female french bulldog coming to rescue...

anyone else have three dogs in the house... or anyone with french and boston?

Hey friends, I know its been FOREVER! I feel so neglectful. I am Amelie and Ninja's mom (the black and white female boston and the red and white male boston with the HUGE white head). I've been with this community for so long and I read all your posts, I just don't post myself as much as I would like to. However, I just wanted to put a really cute video that I thought you'd all enjoy...

my boyfriend is a web developer and i am thinking about creating a blog for people who love their pets. obviously it would be very boston friendly. i figured it would be an interactive way for people to communicate with each other about our furry friends. it would be like a message board or forum, you can ask questions, tell stories, post pictures, share dog friendly recipes etc. everyone would have their own user name and all that jazz.
i guess i just wanted to ask you all if you'd be interested in seeing something specific on this hypothetical web page.

and in other news...
we celebrated woofgang's 2nd birthday with enormous rawhides that are s big as him!